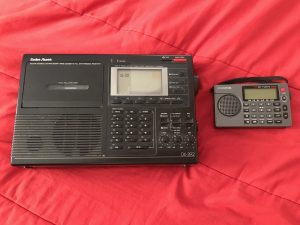 I’ve always had a passion for listening to distant stations. It’s a big reason I eventually got into ham radio. Of course growing up there were a lot more shortwave stations out there than today, but there are still a few stations out there. The only shortwave receiver I have had since I was a teenager was my Radio Shack DX-392. I always use to take it with me to my grandma’s house and would listen to it for hours. (no smartphones or iPads back in those days!)

I still have the receiver today but it doesn’t seem to receive very well in my apartment. (not much does with all the electronics and RFI floating around) Still, I wondered if there was something newer that I could get that might work a little better. As you can see from the photo above, my DX-392 is huge and somewhat bulky to carry around. I wanted something a little smaller that I could take anywhere and enjoy listening to various signals. I researched the crap out of various shortwave receivers out there and was overwhelmed at what to get. I had to really ask myself what I wanted in a new radio. Size was the first priority but I didn’t want to give up performance.

I looked at the popular Tecsun models out there which everyone seems to really enjoy. I wasn’t sure but there was something about them that didn’t seem to be a fit for me. Maybe it was the weird signal strength display or the quirky undocumented features. Somehow I ended up looking at the C.Crane Skywave radio that was going for around $90-100 online. Everything about that looked great except no SSB. Being a ham, I like to listen to various digital and voice signals so this was a deal breaker to me.

As I was doing more reviews, I stumbled across a blog post over at The SWLing Post about a new radio from C.Crane with SSB. I went to the C.Crane website and investigated the CC Skywave SSB further. Not only did it have SSB on shortwave, but it also had the aviation band and NOAA weather radio frequencies.

Everyone seemed to be complaining more about the price than anything else. It was going for $169.99 though was on sale (and still is at the time of this post) for $149.99. Apparently they didn’t think the simple addition of SSB was worth almost doubling the price of the radio. Bah! Just take my money already! 🙂 I ordered the radio along with the power cord and some rechargeable AA batteries. I think I spent more time reading through their shipping policies which made me splurge for 2-day shipping as I didn’t want to wait forever to receive it.

Two days later I did in fact receive the radio. As soon as I opened the box I couldn’t believe just how small the radio was. I snapped a picture of it side by side with my DX-392 radio and it’s crazy how small it is. In the box they included one of those shortwave antenna reels that clips on to the telescoping antenna as well as some earbuds. The radio has a regular mini-usb for power/charging so if you have one of those laying around you can charge it that way too. (or charge the AA’s outside of the radio)

Ok that’s great and all but what does it sound like? First off I tried the shortwave bands and trusty WWV. I never expected to pick it up on the built in antenna but I did. I switched to the ham bands and was able to pick up lots of CW signals as well as a few voice stations. The filter choices are pretty nice as it goes from 6 khz all the way down to 500 hz which helps for those digital signals.

As for as tuning, there is a slight muting every time you turn the dial or press the up/down keys. I think that is normal with most shortwave radios including my old DX-392. You can switch to a slower 1khz tuning by gently pushing in on the tune knob. There is also a fine tune button when in SSB mode which acts like an RIT button in the ham world. It tunes in 10 hz steps to really tune in the signal which is great for ham conversations slightly off frequency.

A few notes about SSB mode. Yes, it has both LSB and USB! It takes a few seconds to engage once you press the SSB button. Also, I noticed on CW signals that there is a warble sound like the frequency isn’t stable. Not a big deal but just wanted to mention it.

Broadcast FM stations sound great too. It does not have RDS which was something I wanted but gave up for all the other features but I can live without that. The airband hasn’t impressed me much though we don’t have too much air traffic in the area. I can pick up the ATIS weather but the audio is really low. I’m not sure if that’s the signal itself or the radio just having low audio on that band. It’s not a big deal as I don’t monitor the air bands much anyway but just wanted to point it out.

The NOAA weather band works great and picked up the local station full scale no problems. It does have a weather alert feature, but it’s very basic and only works for 4, 8 or 16 hours. I think it’s meant more for people traveling or hiking to temporarily alert them vs a 24/7 alert feature you’d get in a dedicated weather radio.

The surprising band I’m really enjoying is the AM broadcast band. It really comes alive at night when some stations can run more power. I live in downstate Illinois and have consistently picked up WLW-700 in Cincinnati, Ohio, WSM-650 in Nashville, Tennessee, CJBC-860 in Toronto, Canada and even WCBS-880 in New York! This is all using the internal antenna inside of an apartment. A lot of stations have noise on the signal but if you turn the radio one way or the other it often nulls out the noise which is awesome. Since it’s so small and portable, you can move it around and find the best position for the particular station you are trying to receive.

As for battery life, I don’t think you’ll have to worry about running out. Even with the backlight on, it should last you a long time. I haven’t run it down yet and only charged it once. That is a lot better than my DX-392 which requires 3 AA batteries to store the memories and 4 D batteries to actually power the thing. The CC Skywave SSB only takes 2 AA batteries. The manual states around 60+ hours of battery using speaker and 70+ hours using the earbuds.

So if you are in the market for a very portable radio that does AM/FM/AIR/WX/SWL with SSB then I would definitely recommend this radio. I’ve had a lot of fun with it and can’t wait to take it with me wherever I travel.