I took a little drive today to my favorite park outside of town to work a few stations in the CQWW contest. I usually don’t work very many contests, but anytime I hear lots of stations on 10m I just have to try a few QSOs. Using the FT-857D in the mobile at 100w and ATAS120A antenna, I was easily working DX. In a short period of time, I worked SN3R (Poland), IR8C (Italy), GW9T (Wales), G5O (England) and F5TTI (France). I setup the video camera and captured these contacts. (sorry about the shaky shots, should have used the tripod)

While I was running some errands yesterday, I decided to tune around the HF bands to see how conditions were doing. I noticed numerous DX stations on 10 meters, but wasn’t sure they’d hear my little mobile station. I stumbled across EA1DR (Oscar) in northern Spain who was coming in pretty strong. I pulled over into a parking lot and tried answering his CQ DX call numerous times, but to no avail. I pulled out of the parking lot and decided to try him one more time. Success! It was a short 30 second contact, but he said my mobile station was doing a great job into Spain. Amazing how one little contact like this can brighten up my day.

Something I’ve been trying to do more of is recording the audio of my HF QSO’s, at least the DX ones. I remembered to hit the record button on my iPhone audio app and captured this nifty QSO. 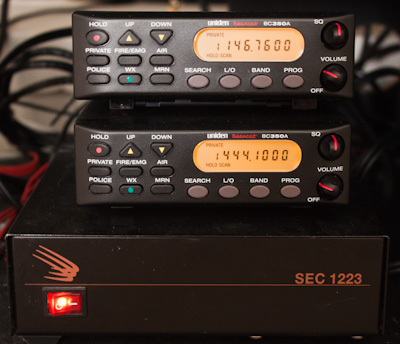 I recently got a wild hair to stream some ham radio audio. I’m already familiar with the streaming process as I stream the Champaign, Illinois NOAA weather radio on Wunderground. My plan was to run a stereo feed with the left channel going to one repeater and the right channel going to the other repeater.

I found a decent deal on some Bearcat BC350A’s on eBay, so I purchased 2 of them. I debated on adding a second sound card to the computer streaming the weather radio, but decided it’d be easier to just use a second computer. Luckily I had an old Dell Optiplex GX260 here that would be suitable for streaming. I have the scanners hooked up to my old Samlex 1223 power supply. I had mixed feelings if this would even work as it had some issues with the HF rig, but so far it’s been running great. The antenna setup is tricky since I am unable to put up anything outside.

The scanners came with a simple window mount antenna with suction cups, but the gear was too far from any windows. When I first tested the audio, the signals would fade in and out and they were picking up interference from surrounding electronics. I did some research on splitting antenna signals and decided to go the cheap route. I found some RG6 quad shielded coax and used that to stretch across the room to the window. I have that hooked up to a 4-way cable TV splitter. I have several adapters converting from F to BNC. Some folks say that will cause a lot of signal loss, but in my situation it shouldn’t matter too much. I live within a mile of the tower that the repeaters are located on, so the using suction cup antenna in the window should suffice.

I decided to use Radio Reference to stream my feed. They mainly focus on public safety feeds, but they also allow ham repeaters on their network. Basically I send my stream to their servers and they stream it to whoever wants it. They can support tons of traffic vs me trying to run the feed from my home DSL line. I was hoping to get my feed approved ASAP as we were expecting some severe weather during the week.

I was approved on May 23rd and went live in the morning on May 24th. On May 25th, we were expecting some nasty weather. One of the repeaters on my stream is the local ARES repeater which runs weather nets as needed. Sure enough, we were under a tornado watch and even had a tornado spotted outside of Champaign. I checked the stats afterwards and discovered I had 35 visitors during that time. That made me feel like my efforts to get the stream going were put to good use.

There are several Android and iPhone apps that interface with the Radio Reference streams. There is one app for iPhone called 5-0 Radio that has my stream available. If you want more details on the stream, here is the link to my feed page at Radio Reference:

If you have any questions about the stream that I didn’t cover, please post them in the comments section. Thanks!